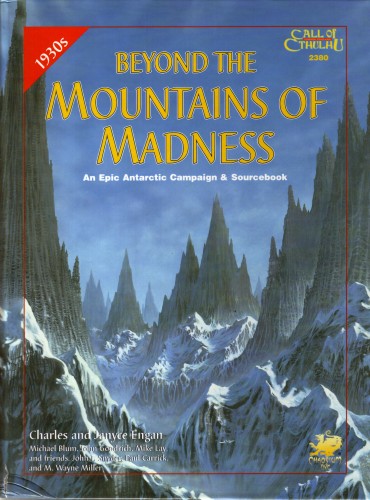 Beyond the Mountains of Madness is based on the H.P. Lovecraft story Mountains of Madness. It’s about another expedition looking to find out what happened to the unlucky expedition featured in the original story. Like Lovecraft’s noveletta, this adventure draws its Antarctic inspiration heavily from the airplane-supported expeditions of Admiral Byrd.

The book is staggeringly comprehensive, and the adventure itself is very well constructed. It’s mostly set in Antarctica, with a prelude in New York and on the expedition ship, and an epilogue also set on the ship. The book includes stuff like the specifications of every airplane type featured in the adventure, cargo manifests for the entire expedition, information about the various kinds of masks for supplementary oxygen available in the Thirties, and so on.

In terms of game design, perhaps the only complaint one might have is that thanks to the lethal nature of the Antarctic environment, the campaign abounds with situations where the entire player character group might die or be stranded thanks to one failed airplane piloting die roll.

This is beautiful, well-designed, well-researched stuff.