This past weekend, I played in the larp Inside Hamlet, in Denmark. The larp gave the play a Marxist vision of decadent nobles living their last murderous days while the Reds were closing in. In the end, when the rebels finally break down the doors, they find only piles of corpses and cowering survivors.

The game was played at the actual Elsinore castle. That was pretty cool. 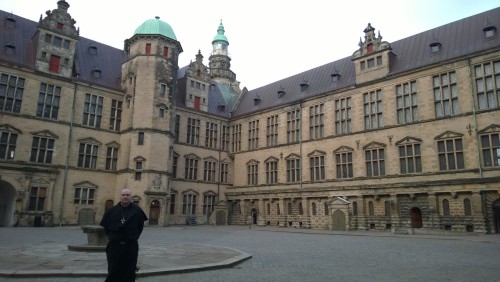 (At the venue, during a break between the acts. My character was a priest.)

The game had the rule “What happens in Elsinore stays in Elsinore”, so I’m not going to go into specifics. Instead, I’ll write about something that occurred to me as I watched the final moments of the dying court. I had already died myself, and was present as a mute ghost.

To prepare for the larp, I watched every Hamlet movie I could get my hands on. The Laurence Olivier Hamlet, the Derek Jacobi Hamlet, the Soviet Hamlet, and so on. Most of them shared a theatrical quality, a feeling of the actors and the director playing with the text and the language. Almost all of the movies were quite good, but they also made it seem as if adapting Hamlet was a bit of a lark.

Or a game of sorts.

When I was in my own version of Hamlet, larping my character, watching Queen Gertrude die of poison, I didn’t feel like we were playing. It felt deadly fucking serious.

The world of Inside Hamlet was grotesque and the characters monsters. It wasn’t played in a realistic style. Yet still, living inside this fictional context gave everything that happened a tragic weight. In the movies, the final duel has been done in many different ways, but only in the larp it felt like it was two people fighting over the deaths of their loved ones.

The movies were a game. The game was not.