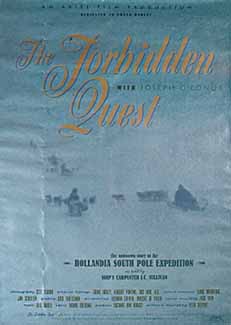 A Dutch fake-documentary Antarctic movie! This is a great Antarctic film, done with very little means. Its a documentary about the fictitious Hollander expedition, put together using the actual vintage Antarctic and Arctic footage shot by Herbert Ponting, Frank Hurley and others.

The story soon veers into the weird when it turns out the Hollander expedition was looking for a tunnel from the Arctic to the Antarctic, but the whole thing is told in a very low key, stylish way. There’s even subtle Lovecraft references and a nod to the famous passage in Shackleton’s South about the fourth man.