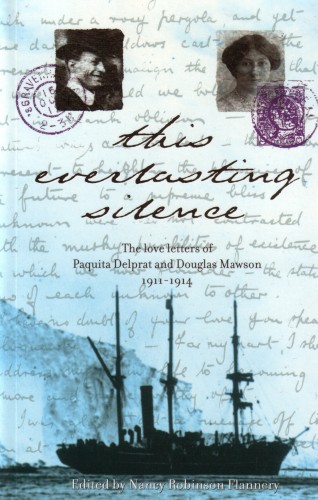 The Australian Douglas Mawson is an Antarctic explorer contemporary with his more famous colleagues Roald Amundsen, Robert Falcon Scott and Ernst Shackleton. He’s less known because he never attempted stunts like being first at the South Pole. Instead, he went to Antarctica purely for science. He suffered great calamity on a long and arduous sledging journey, losing one of his companions to a crevasse and the other to vitamin A poisoning. Poisoned himself, he staggered back to base without food, his skin falling off, only to miss the supply ship that would take him home by one day.

He also wrote one of the best Antarctic books published, Home of the Blizzard, about his travails.

Just before embarking for Antarctica, Mawson was engaged to a girl called Pequita Delprat. They were married three years later when Mawson finally came home. This book contains their love letters from the period Mawson was on Antarctica.

Sad to say, the book is only of very limited interest. Their correspondence was limited by the fact that there were very few opportunities to actually deliver the letters, so it’s actually a book with two running monologues. The title is Delprat’s phrase describing the feeling of not hearing anything from her berothed in months.

Perhaps due to the mores of the day and their relative naivete, neither Mawson nor Delprat is a particularly penetrating letter writer. There are allusions to issues that might be interesting, but they just never get there. It’s a book of inarticulate pining over vast distances.