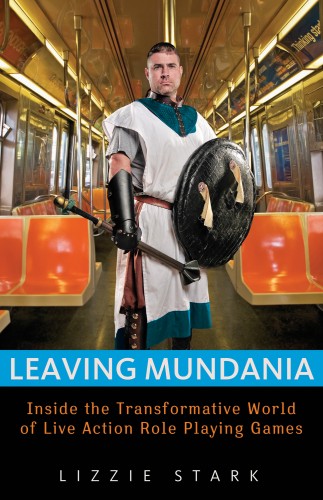 This is a review of Lizzie Stark’s book Leaving Mundania: Inside the Transformative World of Live Action Role-Playing. Since I’m in the book, I cannot claim complete objectivity.

Leaving Mundania is a subjective description of Stark’s journey of discovery into the world of larp in the U.S. and later in the Nordic countries. A subjective style is almost the only one you can adopt in writing about larp, since larp cannot be experienced from the outside. Stark takes this into its logical conclusion by organizing a larp herself, and writing about the experiences that entails.

Reading the book made me realize how different U.S. larp is from the Nordic larp I’m familiar with. I don’t think I ever really understood the point of having so many rules until Stark explains it. She writes vividly about her larp experiences, both good and bad, and this makes it easy to understand why people play these kinds of games.

The book also includes portraits of various individuals Stark met during her exploration of the U.S. scene. They’re some of the best things the book has to offer, touching descriptions of the role larp plays in the lives of different people.

Self-hate is the one factor about U.S. larp and American geekdom that I have most trouble dealing with. It has been a defining feature in many accounts of U.S. larp such as Ethan Gilsdorf’s book Fantasy Freaks and Gaming Geeks. I love it that Stark has reduced it into something she writes about in one chapter because its real to the people involved, but doesn’t accept or internalize herself.

At the end of the book, Stark makes her way to Denmark and Knudepunkt to experience the Nordic scene. These chapters are quite flattering to Nordic larpers such as myself, but reading this book makes me realize that Stark didn’t come to us empty-handed. There’s plenty of ideas that can be stolen and repurposed.

One of the interesting factors in the games she writes about is the amount of organizer work during the game. If there was one thing I felt could be incorporated into my own larp practice, it’s this idea of creating new content for the game on the fly.

I have been portrayed by an actor in a short film once, but this is the first time I’ve been properly described in print. Finnish journalism and American journalism have a difference in culture in that Americans like to give little sketches of the people featured in the story, while in Finland these are rare, especially in serious journalism. According to Stark, I have a face “permanently set on ‘neutral'”.