I’ve worked a lot on tabletop games this year because of my involvement with Vampire: the Masquerade 5th Edition, and I developed a yearning for the kind of design writing about tabletop games that we have for larp in the form of the Knutepunkt books.

As sometimes happens, it turns out this already existed, and had for some time. I found the first two Analog Game Studies collections at Gencon, and just finished reading the first one, published in 2016. It collects the articles originally published online in the journal in 2014. 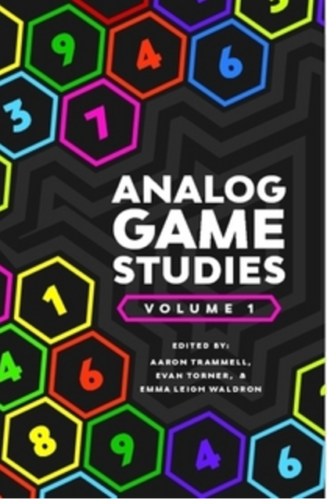 This is good stuff, and I’m happy to know that there’s already a few years worth more out for me to read!

From the perspective of a reader like me who’s interested in roleplaying game design, the highlights from vol. 1 are Jason Morningstar’s article Visual Design as Metaphor: The Evolution of a Character Sheet and Evan Torner’s Uncertainty in Analog Role-Playing Games.

Morningstar’s article takes a classic design question of the character sheet and goes through his own process in developing one for the game Night Witches. Torner writes about uncertainty from many different perspectives, using published games as examples. I especially liked the consideration of uncertainty created by other players, as that’s a design space close to my heart.

Other interesting articles include Nathan Altice’s The Playing Card Platform and Sarah Lynne Bowman and Evan Torner’s Post-Larp Depression. Both felt like the kind of baseline articles about a given subject that can now be referenced in a thousand articles in the future.

The last article in the book is Lizzie Stark’s The Curse of Writing Autobiographical Games, in which she writes about designing a game called The Curse. The subject is deeply personal and the essay is a wonderful, clear example of how difficult subject matter becomes design.