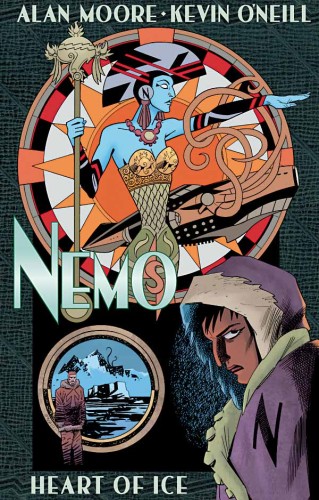 Alan Moore’s League of Extraordinary Gentlemen started with two volumes of relatively straightforward intertextual adventure stories before ascending into the realms of conceptual psychedelia. The spin-off Nemo stories, focusing on the daughter of the submarine captain, are a little bit more restrained than the main series.

In Heart of Ice, the heroes journey into intertextual Antarctica to witness the works of Lovecraft, Poe and others. Conceptually, it creates an interesting counterpoint to the real Antarctica. In real life, Antarctica is mostly uninhabited and empty, a white space devoid of human meaning. In Moore’s comic book, it’s a region steeped in reference and history. There are old literary concepts hiding behind every corner.

I may read too much into this, but perhaps this is why the events of the book are depicted as happening during the Antarctic night. Maybe the empty whiteness of the Antarctic day would have undermined the concept.