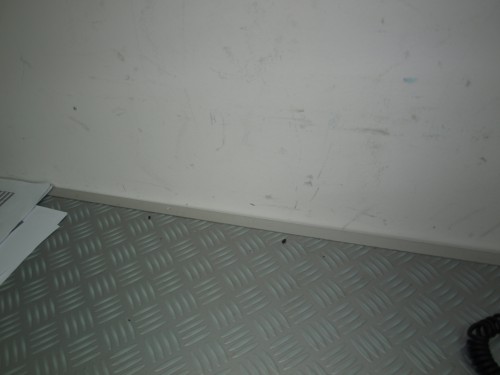 I was traveling from Helsinki, Finland to Tel Aviv, Israel in August 2012. I was going to participate in a Palestinian larp, the first of its kind. Prior to this, I had no involvement with anything related to Palestine or Israel. The possibility of playing in a unique game while also seeing Israel and Palestine motivated me to go.

I flew from Helsinki to Warsaw in Poland, and was going to continue from there on an El Al plane to Tel Aviv.

At the Warsaw airport, I was met by an official from El Al. She took me and some other people who had the same travel plan to the El Al transfer desk. She gave us over to a bald small guy who looked like a court wizard in the costume of a security clerk. I’ll call him the Wizard.

The Wizard set us in a queue and started questioning us one by one. This was the first time I’d been subjected to this, but it’s apparently a routine procedure when flying to Israel. The questions concerned my travel plan, reasons for going to Israel, and my luggage. My impression was that their purpose was to ascertain the level of security scrutiny I merited.

Before me, the Wizard questioned an old Finnish man. He was confused, and confusing. His story was that he’d decided to fly to Israel spontaneously last night, and bought tickets immediately. He didn’t have almost any luggage at all, only a small bag.

The Wizard pegged me and the old man as the most suspicious of the bunch. After interviewing me, the Wizard asked for my hand luggage, and I gave him my laptop bag. He started to lead me through the airport towards the El Al security office. After walking hurriedly for a while, he gave me back my laptop bag, I assume because it was quite heavy.

The El Al security office was a small, cramped area on a lower level of the Warsaw airport terminal building. It consisted of two rooms, each the size of my bathroom, and a small hallway connecting the rooms to each other and the outside world.

The security space was clogged with luggage, security officials and passengers trying to squeeze past each other. The Wizard took upon himself the task of organizing the human chaos: you sit down, you stand up, you move to the hallway, you stand here, you go there.

One of the two rooms was a small interrogation space, and the other resembled the crappiest CSI lab one could imagine. I caught a glimpse of the old man before the Wizard told me to sit on a chair in the interrogation room.

I waited and watched the chaos around me for 20 minutes. A young, good-looking security man (I’ll call him the Model) was going through someone’s underwear. A middle-aged, authoritative woman stormed in to give conflicting orders (I’ll call her the Balkan Queen) and tried to locate my big suitcase. Trying to be helpful, I told her it was right in front of us.

I was told to move to the second room. The Model got the task of conducting a body search on me. The old man was still sitting on a chair next to the door. This offended the sensibilities of all present. Finally a solution was found in the form of a curtain: the old man was curtained off so he couldn’t see me, while the Model told me to undress.

I took off my sweater, emptied all of my pockets, and lowered my pants to the knee. I got to keep my underpants. The space was extremely tight: me, the Model and two examination tables took up every square inch available.

After the search, I was told to put my clothes back on, take my passport and wallet, and leave everything else on the table. The curtain was removed and the Balkan Queen told me to sit down next to the old man and the door.

The atmosphere was of hurried disorganization. The Wizard was yelling into his walkie-talkie, the Balkan Queen was berating everybody, and the Model was looking apologetic. Suddenly the Balkan Queen told me that I’d have to board the plane immediately, and leave my things behind. I would only be allowed my wallet and my passport.

I went into a panic. I begged for them to let me take the items that seemed most essential at the moment: my cell phone, a book, and a paper with the address of the hotel I was going to stay in Jerusalem.

They refused the cell phone, but let me have a quick rummage through my laptop bag. In the end, I was hustled out cradling a change of underwear, two books and my traveling documentation.

The Balkan Queen half ran, half hustled me through the terminal building until we made it to the plane. I was the second to last passenger to enter, and had a seat in the last row. I did the walk of shame through the plane, and asked a stewardess for a plastic bag for my belongings.

I sat down in my seat. In front of me was a screen with the El Al slogan: “It’s not just an airline, it’s Israel”

Suddenly the Wizard appeared next to my seat and told me to get up. I’d have to go back in, but he reassured me it had nothing to do with me. I was needed to translate for the old man. He hadn’t understood why it was necessary for him to lose all of his things.

I went back to the gate to find the old man surrounded by a gaggle of security officials. I explained to him in Finnish that I had no idea what was happening, but that we were promised that we’d get our things back. The Balkan Queen told me that it was my responsibility to make sure the old man took the necessary steps in Tel Aviv.

After we sat down, the old man complained that he’d lost all he had: an USB stick and a cell phone. I wasn’t in a very receptive mood, having traveled with quite a bit more than that.

In Tel Aviv, I shepherded the old man through immigration until we got to the luggage reclaiming area. I made a complaint about my lost possessions, and helped the old man to make his. After that, we went our separate ways. I walked into Israel for the first time in my life, with almost nothing on me.

In retrospect, I made several mistakes:

1 – Flying El Al. I knew the reputation the airline had for security, but didn’t expect this.

2 – Not begging hard enough when they hustled me out of the security room. Taking my medication with me would have been a good idea.

I wrote this blog post because I’d never heard of this happening to anyone before. I’d read about all kinds of security-related perfidy especially when flying to Israel, but never about having all of your stuff confiscated. I’ve tried to form a theory about why this happened. In my questioning with the Wizard, nothing untoward came up. I told him I was a tourist, and since he didn’t ask about Palestine, I didn’t tell him about planning to go there. I think I got the special treatment because I was profiled: I was a young(ish) male traveling alone.

The old man clearly got the special treatment because he was so weird.

As to why they needed to keep my stuff, I have no idea. Perhaps they wanted to do some kind of a super special secret check up, or maybe they just fucked up. The chaos at the security office would suggest the latter.

I stayed at the Azzahra Hotel in East Jerusalem. I cannot praise this hotel and the staff high enough. They were very helpful and supportive when I walked in, and did a great job in getting all of my stuff back.

El Al kept my cell phone, laptop and other possessions for approximately 24 hours. They returned everything except two ballpoint pens.

I found the photo at the beginning of this blog post in my camera after I got it back. I recognize the surface from the security room. I’ve heard that sometimes security officials take a photo with a camera to see if it’s a real camera. Maybe that was the case here.