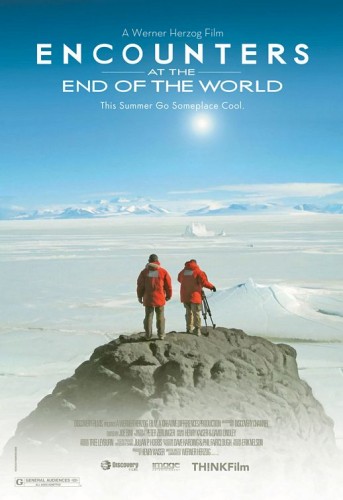 Documentary: Werner Herzog: Encounters at the End of the World (U.S.A. 2007)

A kind of a sequel to Herzog’s scifi speculation documentary The Wild Blue Yonder, this is a movie about the people who go to work in Antarctica. Its a very good movie, poetic and beautiful even when it doesn’t make anything prettier than it actually is.

I like Herzog’s seemingly effortless, essay-like style, with all of the voiceovers and commentaries it entails. Somehow he makes many of the truly bizarre things and customs make sense in their own context, so that you have to think for a bit to remember that this is, in fact, very strange.

Of special interest were the footage from inside the plane from Christchurch to McMurdo, the volcano Mt Erebus and the many buildings and locations at McMurdo.

2 thoughts on “Antarctic Research Blog #73: Encounters at the End of the World”