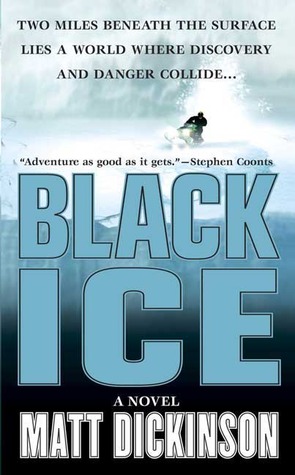 Black Ice is a paperback thriller set in the world of contemporary Antarctic exploration. It doesn’t have any particular literary aspirations, but the Antarctic milieu is depicted well.

The story concerns an expedition to cross Antarctica at its widest point by two men: the Norwegian Carl Norland and the British Julian Fitzgerald. The two men run into trouble almost at the end of their trip, and are rescued by the chief of a private scientific base, Lauren Burgess. The story deals with the problems of having clashing personalities in a small, remote base. This wouldn’t be a thriller if the clashes didn’t escalate into a question of life and death.

Dickinson has visited Antarctica himself, and builds parallels between his story and classic Antarctic stories such as those of Scott and Shackleton. Burgess expresses an admiration for Amundsen, but ends up resembling Shackleton in her quest to get everyone home alive.

The book sags near the end with the endless tedium of crossing vast expanses of ice. Maybe it would be more exciting if I hadn’t already read many real life accounts of similar journeys. Burgess is not much of a protagonist, but Fitzgerald is a fun foil for her. He resembles real life characters such as Ranulph Fiennes in his megalomaniac gloryhounding, taken to the extremes required by the story.