(The Gamers: Hands of Fate)

The Gamers is a series of American low-budget or amateur movies about roleplayers, larpers and card gamers. The first film, simply titled The Gamers, was released in 2002. It was followed by the sequels The Gamers: Dorkness Rising in 2008 and The Gamers: Hands of Fate in 2013. The movies distinguish themselves with their wit, pace and deep involvement in gamer culture.

The best is the latest, Hands of Fate. It’s an amazing movie in terms of what it attempts to do: Its emotional arc is predicated on the way narrative content factors into various kinds of games. Our protagonist is prejudiced against a collectible card game modeled after The Legend of Five Rings because he believes it doesn’t have the story potential of roleplaying games. During the movie, he goes deeper into the card game and discovers the narrative richness of a metaplot where major events are decided in tournaments.

Needless to say, this is not territory commonly explored in cinema. What’s more, the movie sells it. It’s a comedy, and its funny. One thing it’s not is condescending to the audience. Even I had trouble getting all the references, and if you watch it, reading up on how The Legend of Five Rings or Pathfinder works might be a good idea. Hands of Fate goes pretty deep into hardcore geekery, and is all the better for it.

The older movies in the series don’t have the conceptual ambition of Hands of Fate, but are nevertheless fun stuff. The first goes through the standard jokes about fantasy tabletop roleplaying, but it also has a definite inside perspective. The second, Dorkness Rising, is almost like the mature form of the first. The joke’s the same, but the execution is better. Anyone who’s played D&D will have fun with the absurdities depicted here, and those who haven’t will be confused. 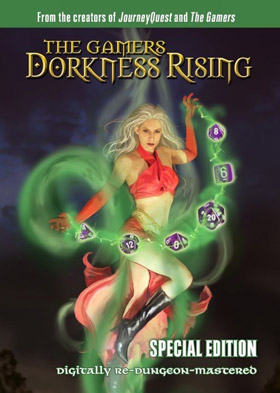 Many of the jokes are based on visualizing strange conventions games like D&D have. Thieves steal to test their stats in action, and off-game disruptions to the game cause problems with the in-game experience. In a sense, the movies are an attempt to capture what playing D&D feels like: it’s not about the story of the character, it’s about the meta-experience you have playing the game.