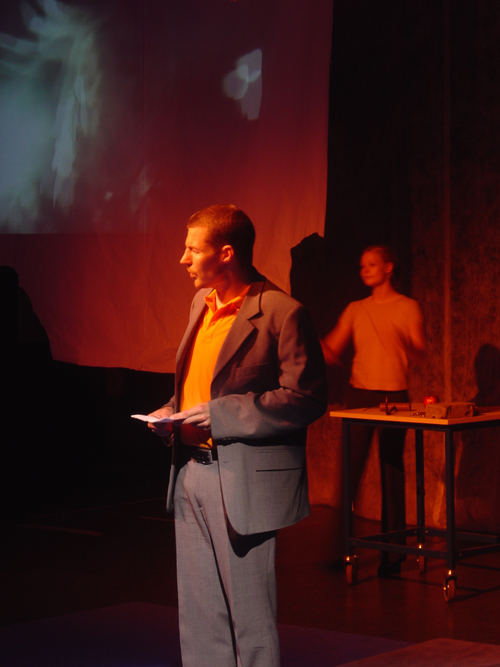 Bouffe c’que j’te donne is a circus performance created by Juhana Pettersson. It had its premiere in 2005 as part of the Panorama 5 exhibition at le Fresnoy, Tourcoing, France.

Bouffe c’que j’te donne is a performance with an actor and a trapeze artist employing interactive video materials. It’s a meta-performance of sorts, where the show derails catastrophically in the middle, the performers fight on stage and run off in a huff, leaving the audience alone.

After a few minutes of painful silence (during which about one third of the audience left each time), the technicians put on a video they’ve shot during the rehearsals, depicting the performers in an unflattering light. They return during the video. The trapeze artist destroys the screen, and the actor tries to get her onto the trapeze one final time to end the show in an honorable way.

When I applied to Studio national des arts contemporains le Fresnoy, I proposed to do a circus performance during my first year. I had a very hazy idea of what it would entail, and a lot of the things that ended up in the final version we came up with during the rehearsals.

Bouffe c’que j’te donne was a work of aggression, a kind of an anti-performance. During the premiere, when we had a full house and everybody was a bit drunk, people laughed and had fun like in a comedy. In the show with the critics, the small, antiethical audience made the show heavy as lead.

This latter version was more in tune with what the show was about.

Ostensibly, the show was about surveillance. We had nifty little cameras we gave to the audience, we took people backstage to be interviewed so that their images were projected onto a screen in front of the rest of the people, and we made them do endless, meaningless questionnaires. (“What’s your favorite type of apple?”)

All of this served to camouflage the essentially misantropic nature of the show. One audience member called it a mirror in which you see nothing, and a member of the jury which evaluated it called it a fascist system.

I myself played on video the character who initiates the breakdown of the show. He’s called Special Boy, the reluctant masochist. There’s onstensibly live video on the screen, and the actor’s making an entrance speech. A guy hauls forth a naked man with a plastic bag on his head. He’s supposed to do stuff like hang bricks from his testicles, but he doesn’t want to get hurt, and escapes before they manage to get him on the stage. In shock, the trapeze artist runs off after him.

The actor is left on the stage alone, in front of the audience. He tries to entertain them with a song, but gets flustered and escapes.

Bouffe c’que j’te donne was captured on video in its entirety with three cameras. Here’s a video of excrepts from the documentation (duration: 09:46).