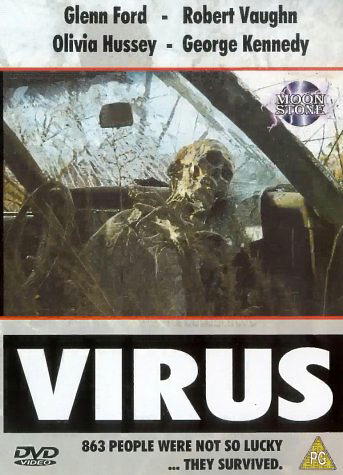 Virus is an Eighties catastrophe movie about a virus that kills everyone on Earth except for the people living on Antarctic bases. Its definitely a Cold War movie, with the Americans and Russians sharing the blame for the apocalypse that follows.

As sometimes happens with catastrophe movies, this one doesn’t really have any main character, but instead focuses on the effect of the virus first on the world and then on the Antarctic community.

The main thing to like here were the values. Its a wholly pacifist movie, casting the main world powers in a dangerous, possibly psychotic light, espousing the necessity of cooperation if we are to survive. Its dated now that the Cold War is long over, but you can still appreciate the sentiment for the time it was made.