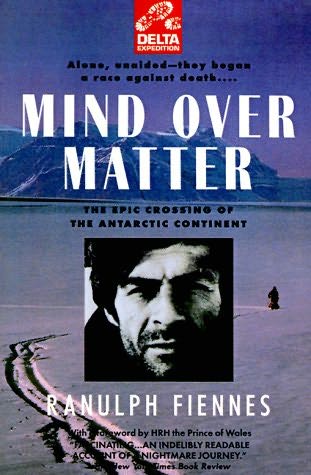 Ranulph Fiennes and Mike Stroud attempted to cross the Antarctic continent manhauling unsupported in the 1992-93 season. Unsupported means that they pulled all of their food and equipment all the way from coast to coast, breaking the record for the longest unsupported polar journey in the process. The expedition was a success, and both Fiennes and Stroud wrote a book about it. I’ve already talked about Stroud’s book, Shadows on the Wasteland, here. Mind Over Matter is Fiennes’s book.

It’s strange to read two accounts of the same two-man journey. There’s a bit of polar scandal here, because the two companions didn’t get along and write unpleasant things about each other in the books. Stroud’s is the better book, more descriptive and informational, but Fiennes’s book has some interesting qualities as well. It paints a strange picture of its author. The leadership stuff Fiennes insists upon doesn’t seem motivated only by necessity and he seems positively disingenious when he’s talking about his own motivations for various decisions made on the journey.

The book really shines, however, in its descriptions of embarassing problems. Most polar expeditioners suffer from modesty which prevents them from writing about this stuff, but not Fiennes. He talks about frostbite of the penis, sexual fantasies as a way to pass the time, spraying piss all over your only sleeping bag, and a thousand other incidents.