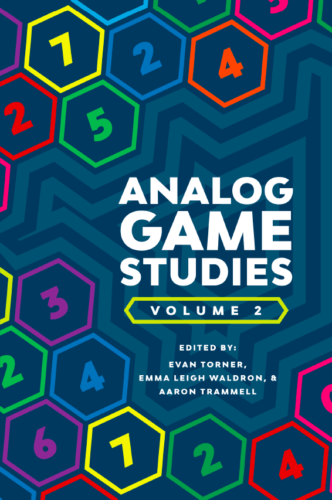 I’ve read the second of the Analog Game Studies books in my quest to catch up on the series. You can check out the book here or read the articles here.

After the introductory first book, this second volume is where the series really gets going. It feels like in addition to being collections of articles about non-digital games, the series also engages in trying to define what “analog games” means. Reading this book, the divide into digital and analog games feels arbitrary, yet also necessary to carve out space for all the types of games that often get excluded from discussions of games.

The book starts strong with veteran boardgame designer Bruno Faidutti’s essay Postclonial Catan. In it, he subjects European-style boardgames to a postcolonial analysis, writing from his own perspective as a designer of Eurogames. To me, the interest of the essay lies in not just the analysis, but also on the design perspective on why Eurogames seem so full of national stereotypes, often cringeworthy.

In other articles, reading Anglo-American writers about Eurogames is strange because it reveals such deep cultural fissures. For example, there’s a critique of Eurogames like Settlers of Catan in that they avoid violence as a subject matter. This creates a false representation of history because when you remove violence from colonialism, for example, and reduce it to nothing but trade, you whitewash historical crimes.

This critique is obviously totally sensible! Yet the rule against war and combat is ingrained in me from my own childhood, from how my mother and father and the worldview I learned at home. The idea that family games should be violence-free is something that makes sense to me on a gut level. It feels shocking to read it being talked about so casually, as if it was just some weird European quirk.

Closer to my home field of roleplaying games and larp, there’s the article Out of the Dungeons: Representations of Queer Sexuality in RPG Source Books by Jaakko Stenros and Tanja Sihvonen. I’d seen it years ago at Ropecon in presentation form, but it was interesting to read it properly. Queer sexualities have been dealt with in roleplaying games in a messy, often weird way, and I remember some of the specific examples from my own roleplaying history.

The idea of roleplaying or larping with an audience has kept recurring in different contexts through the years, from art galleries who wanted art larp to be audience friendly to the modern phenomenon of roleplaying as a YouTube spectacle. There’s three excellent articles in the book which expand on this in ways that make me think our previous conceptions of the subject have been simplistic. These articles show that if you really want to do this, roleplay with an audience, there’s a whole art to it.

The articles are Moyra Turkington’s A Look Back From the Future: Play and Performance in Biosphere 2013, Sarah Lynne Bowman’s Connecting Stage Acting, Role-Playing and Improvisation and Lisa Quoresimo’s Joy and Meaning in Theater Games. What I especially like about them is the basis in actual experiences with this kind of work.

This is another great collection, well worth your time. The only real issue with it is that the articles were originally posted online, and a few contain references to illustrations or other features not included in the book.