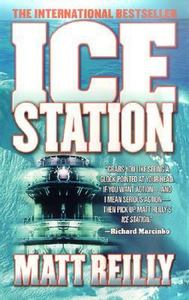 Ice Station is an action thriller about an American Antarctic research base that discovers something valuable under the ice, and various governments around the world who send military forces to capture it. It’s mostly composed of improbable action scenes.

The book is silly and the action scenes over the top, but that’s actually why it kind of works. In the beginning, I found the book really dumb, but after a while I started to get into it. There’s a scene where the hero, U.S. Marine callsign Scarecrow, jumps into the Antarctic Ocean and blows up a French submarine by using his grappling hook to shoot explosives into the sub’s torpedo bays. It’s kind of fun, like reading a transcript of a Michael Bay movie.

At first, I found the book’s belief in American moral superiority annoying, but after a while it ceased to bother me. All foreigners are untrustworthy psychopaths, of course, but many Americans proved to be the same.