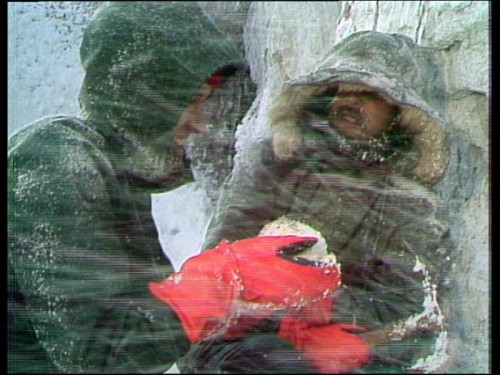 The Seeds of Doom is a six-episode storyline in the 13th season of the British tv series Dr Who. British scientists working at an Antarctic base discover strange, organic objects in the ice, and take them inside for study. They turn out to be dangerous, infecting the scientists and eventually placing the entire world at risk. The Doctor is called in to investigate. The first part of the story is set in Antarctica, and the second in Britain on the estate of a rich, mad plant-lover.

It’s a fun sci-fi story, with many classic Antarctic themes. The idea of alien lifeforms falling from the sky and being buried in the ice reflects the role of Antarctica in collecting meteorites. Unknown horrors lurking, forzen under the ice go back to Lovecraft’s At the Mountains of Madness. And of course, Antarctica is a repository of ancient fossils and ecosystems preserved in lakes sealed off under the glaciers.