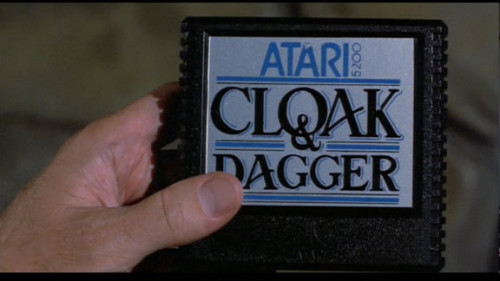 Cloak & Dagger is an American children’s movie released in 1984, originally as a double feature with The Last Starfighter. It’s about a boy who likes to play imaginary spy adventures that greatly resemble roleplaying games in the backroom of a game store.

As usually happens in these movies, the game soon becomes real, and the boy has to foil an attempt to bomb an airplane.

The movie is both boring and morally questionable. It seems to be about learning how to steal, run into traffic and kill people. Sometimes you just have to shoot people even if you don’t want to, because they’re evil.

The beginning of the movie is fun, with a spy clad in a grey leather jacket arriving with a parachute in the colors of the American flag. Giant dice rolls on the streets as we move from the game to the children playing.

Unfortunately, the good stuff stops after the first five minutes, never to return. Perhaps the only other good thing about the movie is the setting of the game store. It’s a nice glimpse into the period. Amazingly, they have a poster of the Atari E.T. game on a wall.