When I was twelve, I thought that Dragonlance Chronicles by Margaret Weis and Tracy Hickman were the best that the fantasy genre had to offer. Sure, I liked Tolkien too, but he had nothing on Dragonlance.

Now that I’m 34, I see no reason to revise this opinion.

It’s a shame that there’s so few adaptations of Dragonlance, good or not. We’ve been able to find two, the animated version of the first book, Dragons of Autumn Twilight, and the Russian musical version of the second trilogy, Legends.

You can watch the musical here, with English subtitles:

The thing about the musical version is that it’s absolutely excellent. You have to know the story, but for an old Dragonlance lover such as myself, this is manna from heaven. According to the YouTube page, it’s actually a promo concert held by the theatre studio Lege Artis at the 8th of February, 2014 in Moscow. It features scenes from a musical called The Last Trial.

Before this, I had never realized how operatic the Legends trilogy was. It’s been distilled into a story about Raistlin, Caramon and Crysania, and the interplay of love and power in Raistlin’s character. The possibly best scene has Raistlin singing a duet with Takhisis the Queen of Darkness about his love affair with Crysania. The YouTube video above features people from three different casts, so don’t be confused if the actor playing Raistlin suddenly changes. 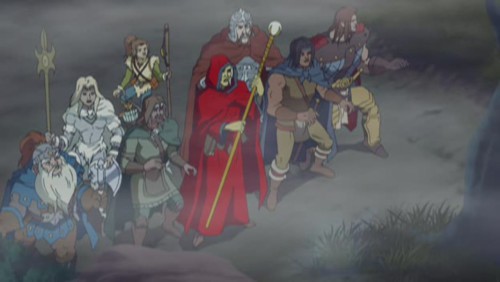 (A still from the movie Dragonlance: Dragons of Autumn Twilight)

Unfortunately, the animated Dragonlance: Dragons of Autumn Twilight movie fails to live up to the standards set up by Russian musical theatre. It goes through the story of the first Dragonlance book, somehow combining the worst features of both classical Eighties Saturday morning cartoons and modern 3D-animated stuff.

It also remains faithful to some of the dumbest stuff found in the original book, things that any reasonable adaptation would have cut out. It’s a dismal effort.