Chess has arguably pervaded our culture more thoroughly than any other game. It’s used as a metaphor, a visual motif and as decoration, and sometimes people even play it.

My chess career started and ended while I was still underage. There’s one game I remember loving as a child much more than chess, and that was Knightmare Chess, the French variant published in English by Steve Jackson Games. It adds a selection of cards to chess, and every round you can move a piece and play a card.

I lost my copy of Knightmare Chess and its sequel, and for some reason they weren’t reprinted. Until now!

It’s a much better game than I remembered, and quite an interesting one.

1 – Chess is transparent. You know at all times everything there is to know about the state of the game. All the information about what’s happening is right there on the board.

2 – Chess is not random. You can calculate all possible moves from any given game state. 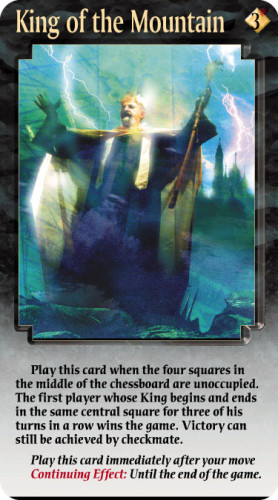 Knightmare Chess challenges both of these qualities. A player’s hand, and the cards in her deck, are secret from the other player. This means that when you play the game, you see the state of the chessboard, but that’s not the whole story.

You can build your deck, but the cards come into your hand randomly. This means that the game has an element of chance: You can have good cards in the beginning, or bad ones.

Playing the game, it feels as if Knightmare Chess is a game designed to comment on, and perhaps to challenge traditional chess. It plays with the assumptions chess has, sometimes irreverently. There’s a definite tension between the hidebound traditionalism of chess, and the chaos of Knightmare Chess. The appeal of the game lies in this tension. It’s a good game precisely because there’s no harmony at its core. 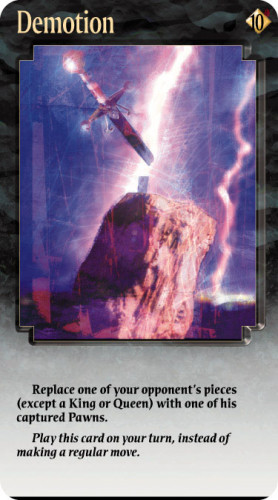 Still, there’s one temptation in Knightmare Chess above all: If neither side has good cards and if both come up with good strategies, the game can accidentally devolve into normal chess.