Mazes & Mutants is a recent episode on the second season of the new Teenage Mutant Ninja Turtles animated series. The Turtles find a D&D-style game and start playing. Soon they escalate into larp.

The episode is both a compilation of the greatest cliches of game movies and a surprisingly fun spoof of larp. 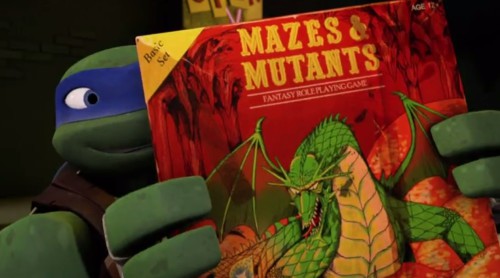 First the cliches. Once the Turtles start larping, the GAME BECOMES REAL. The larper they meet is an overweight nerd with acne. They have to rescue the princess.

But as the episode progresses, it becomes apparent that despite the wearying cliches, there’s a lot of smart stuff in there as well. The title of the episode references the classic scare movie Mazes & Monsters, about a bunch of kids who go nuts after playing D&D. Mazes & Monsters is the original GAME BECOMES REAL story, and referencing it here (instead of making it Mutants & Dragons) indicates some self-awareness.

Tabletop roleplaying and larp are portrayed as a straightforwardly fun activity, and the episode teems with clever little references to game culture. It has also spawned a series of larp-themed Turtles toys.

(From the left, the fighter, the elf, the dwarf and the wizard.)