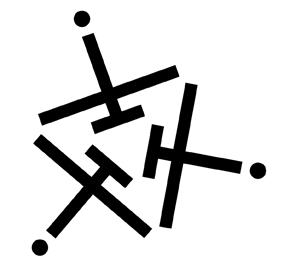 En kadu mitään (I Regret Nothing) is a larp by Juhana Pettersson, Mike Pohjola & Eirik Fatland.

Created for the Olohuone 306,4 km2 urban art festival in Varissuo, a suburb of Turku, Finland, for 20 participants. Played on the 8th of June, 2006.

A reality game set in a bizarre world of angels and madmen, looking for a way to descend into the underworld.

I Regret Nothing is, hands down, the strangest larp I have ever made. Here are some things we had in the game:

– Our own radio station, with four hours of programming. We gave the players radios and bought a couple of mini-transmitters broadcasting from an MP3-player and a laptop. One transmitter was carried by the players of supporting characters, the other was under the counter of a pizza place. The people there even set their own radio to receive our signal, which was embarassing due to the unsalutary content of our programming.

Content highlights include a marathon of Sweet Dreams covers and religious sermons I lifted off the websites of Finnish Christian extremists.

– A Sheet Monster, played by me. It was the Kerberos of our game, the guardian of the underworld. It attacked by throwing paralyzing, black bedsheets on the players.

– A load of posters, stickers and wifebeaters bearing our game logo. We set these around the shopping center and nearby locations to mark the game area.

The original idea for the game came from Mike Pohjola and involved reality game -type elements. The player groups could only communicate by persuading bystanders to carry their messages or posting stuff on a public notice board.

All the game and character concepts were based on the Freudian/Christian division into high and low, Apollonian and Dionysian, Super-ego and Id, God and Man, Sane and Mad, God and Angel, Angel and Man, City and Cave, and so forth.

To complicate things further, all the characters were called either Pablo, Flavio, Isabel or Maria.

Following the ideas of Martin Ericsson concerning game structure and use of resources, most of the game was spent in a shopping center. We reserved our most spectacular venue for the grand finale when the characters find their way underground and meet God and the Superego playing poker.

We had the vast underground parking lot of an underground ice hockey stadium, empty during the summer months. The players walked down a huge ramp and along a dark tunnel that felt like the kind of concrete military installation you normally see only in the movies. Emerging from the tunnel, they see the parking lot cavern, and at the other end, the poker table.

Photos from the game

Photos by the players

2 thoughts on “I Regret Nothing”