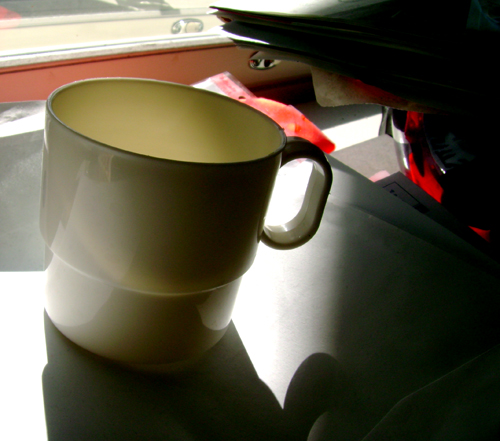 Muovikuppi (the Plastic Cup) is a live roleplaying game created by Juhana Pettersson.

Synopsis: The participants are an extended family coming together to divide an inheritance left behind by an old great-aunt. The game uses ceramic coffee cupsas the principal means of expression for the players: they shatter the cups on the ground. There are 200 cups, ten for each player.

The game is in part inspired by an inheritance in my family. Although we managed it in a civilized manner, the stuff we had to divide was very strange. I got a dried blowfish, an African spear and a plate of Egyptian hieroglyphic erotica, among other things.

The game is about the meaning of objects and possessions. The basic tension is created when the players do their utmost to acquire objects while the players express themselves by destroying coffee cups.

I’ve found that making games about difficult subjects is hard, because the participants need to be motivated enough to be creative in the game. In the Plastic Cup, I attempted to facilitate this by making destruction the central activity of the game. Breaking things is fun, and pulls the participants into the game.

The Plastic Cup is the second in a series of game exploring various physical methods in larp. The first, Luminescence, I created together with Mike Pohjola in 2004.

It’s called the Plastic Cup, because unlike the ceramic of the coffee cups destroyed in the game, plastic is hard to break. I wanted to make the game emotionally supercharged, but not emotionally crippling. Because of this, the characters were all designed to be emotionally resilient survivors, people who deal with problems instead of succumbing to them. Plastic people, not ceramic people.

Summer 2012 in Ramallah, Palestine, run by a group of Palestinian organizers

5. 4. 2008 in Nurmijärvi, Finland, run by Juhana Pettersson as part of the Freefall festival

3. 4. 2008 in Vantaa, Finland, run by Juhana Pettersson as part of the Freefall festival

The Plastic Cup has been designed to be as simple to run and organize as possible. I grant general permission to run the game anywhere you see fit, as long as I’m credited as the original designer of the game and the game is run on a non-profit basis. As a courtesy, I would request that if you run the Plastic Cup, you would email me about it (at jlp@iki.fi) and send photos afterwards, so I can put them up here on the website.

I have put together a PDF file featuring all the characters, production guidelines and game master instructions. You just have to print it out. All the material to be distributed to the players is included in the file, except for the coffee cups themselves.

7 thoughts on “The Plastic Cup”