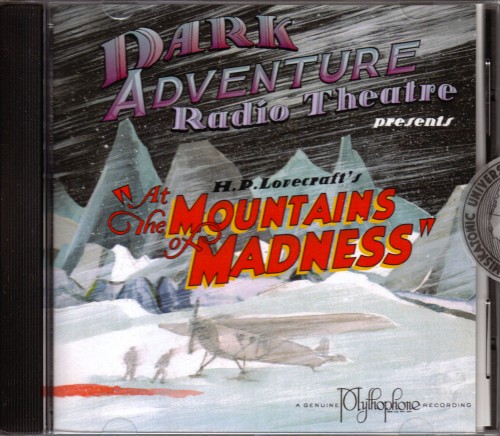 The Lovecraft story is a classic of Antarctic fiction, and will probably crop up again here in some format. This version was really neat. It has been produced in the fashion of authentic radio plays of Lovecraft’s period, complete with cigarette commercials and old-style sound effects. The production design, the packaging, the atmosphere, all are perfect. It manages to be campy yet still creepy at the same time.

The story is about an Antarctic expedition Lovecraft modelled after Richard Byrd’s aeroplane assisted expeditions. The expedition discovers the remnants of a society of Elder Things and other, more terrible horrors. I was especially impressed by the stuff enclosed with the CD, press clippings from the Arkham Advertiser, sketches of the murals of the Elder Things, and other beautifully made extras.