Knudepunkt is an annual conference dedicated to ambitious larps and other roleplaying games. Every year, one or more books are published along with the event.

The Danish book editors Charles Bo Nielsen and Claus Raasted are attempting to start a tradition of a yearbook collecting articles about games played the previous year. To set an example, one of the two Knudepunkt books this year is called The Nordic larp yearbook 2014. You can download it here as a free PDF. 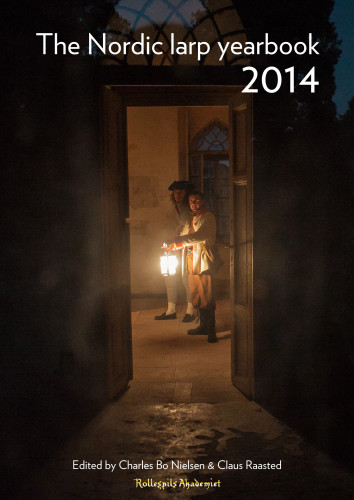 There’s one big issue I wish to get out of the way before I go deeper into the meat of the book: The issue of geography.

Put bluntly, the Nordic larp yearbook contains a lot of larp not played in the Nordic countries. The biggest individual country represented in the book is the Czech Republic, with four games. There’s three Swedish games and three games I’d characterize as international, for different reasons. Russia, Denmark and Finland follow with two games.

There’s been some debate lately about what is “Nordic larp”. The editors chose to end this book with a quote from the game researcher Jaakko Stenros: “A Nordic larp is a larp that is influenced by the Nordic larp tradition and contributes to the ongoing Nordic larp discourse.”

Following this definition, a game can belong in the category of “Nordic larp” without taking place in the Nordic countries, since the tradition is the thing. The upside of this definition is that it’s inclusive, but it has a side-effect of drafting a bunch of games from other traditions into Nordic larp. This is especially glaring with countries like the Czech Republic and Russia, with extremely rich larp traditions of their own. Then again, many organizers in these countries are influenced by Nordic larp, as should be obvious by the fact that they write in this book.

The non-Nordic games are also some of the most interesting. The “why didn’t I play in this game” prize goes to the Russian larp Saint Summer. A game about the Sixties in the U.S., it sounds absolutely crazy, with Woodstock, free sex, soldiers fighting the Vietnam war, and a lot of other stuff.

Other articles feature both fascinating games and interesting methods and details. Another highlight is the Danish game Morgenrøde, about the hippie movement in Denmark in the Sixties and Seventies. (Indeed, reassessing Sixties counterculture is one of the big themes in the book. Another larp about a similar subject is the Russian Ticket to Atlantis.)

Morgenrøde’s mechanic for drug use sounds extremely interesting, and definitely worth stealing. It involves a black box type solution instead of the classic “pretend to be high” method of playing it out. Danish speakers can read more about the game in the documentation book Bogen om Morgenrøde, available as a free PDF here.

Another big theme in the book is gender. The Norwegian rerun of the Swedish game Brudpris featured in the book seeks to model extremely oppressive gender structures. The Swedish fantasy game Livsgäld is about redefining both gender and the fantasy genre. Other games, such as the Finnish Tonnin stiflat and the Swedish Mare Incognitum, had various solutions to ensure gender equality and equality in terms of game content for players of different genders.

Reading the book, one thing I think we’ve become better at is writing for people from other scenes. This means we have to explain somethings that are obvious in our local context, but strange for people from other contexts. There’s a great example of this in the article about Danish fantasy larp called Nemefrego 2014. Apparently, characters killed in their sleep has been a traditional problem in Danish fantasy games. This is called a “sleeping bag murder”, and in this game it was forbidden. The article uses this as an example when talking about changing play culture.