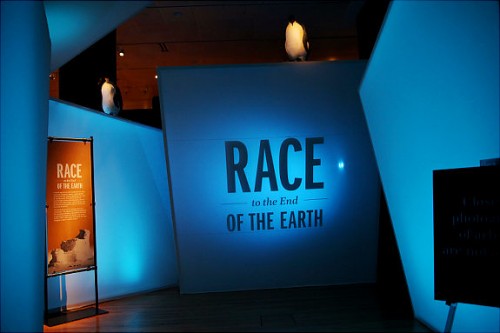 Exhibition: American Museum of Natural History: Race to the End of the Earth (2010)

I was visiting New York over the holidays, and there was an exhibition about the race between Scott and Amundsen to reach the South Pole at the American Museum of Natural History.

The most interesting parts of the exhibition are the various items on loan from the Scott Polar Research Insititute and the Fram Museum. There’s a scrap of paper from Scott’s journal and Amundsen’s binoculars. Scott’s hut has been replicated, and seeing the living quarters of the men in real size is an interesting experience.

There was an attempt to engage the spectators with trading cards featuring various expedition members. The idea was that you’d pick a random card and follow the person depicted on it through the exhibition. The card’s were quite neat. I couldn’t help myself, and had to collect the whole set.

The exhibition struggled mightily to make the race between the two men seem an even one. Typical of a lot of Anglo-American commentary, it’s very understanding of Scott’s foibles, content to ascribe his failures to bad luck. The reality of the race was that the superior man won and the amateur died.