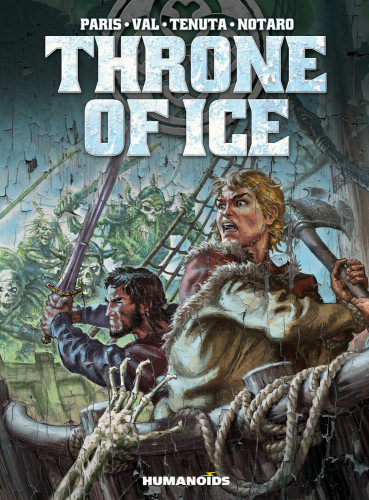 Right now, Antarctica is an arid continent of ice, but it hasn’t always been so. A long, long time ago the location of the continent was different, and so was its climate. This is borne out in the fossil record, and greatly perplexed early explorers before the idea of continental drift was conceived.

Throne of Ice, a comic book written by the French novelist Alain Paris, employs this idea to tell a fantasy story of a kingdom on the Antarctic continent, before the coming of the ice. Its fate mirrors that of Atlantis, which was submerged before the Antarctic kingdom was frozen.

For much of the story, Throne of Ice is pretty un-Antarctic. It’s a kind of deflated Jodorowsky narrative of kings and betrayals, fights of succession and reversals of fortune. The interesting stuff is in the margins, the larger framework the comic draws from.

In addition to Antarctic pre-history, Throne of Ice references (albeit lightly) classic notions of polar occultism, such as the Piri Reis map and precursor races.