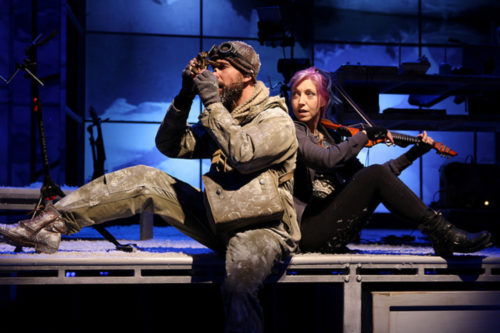 Ernest Shackleton Loves Me is a New York musical about a Brooklyn single mother and Ernest Shackleton’s Transantarctic journey. I didn’t see it live; a recording appeared on YLE Areena, where it will be for two more weeks.

In the story, Kat makes a video for an online dating site only to be replied to by Ernest Shackleton who’s in the middle of his disastrous Antarctic journey. His story takes up much of the musical, but our perspective is firmly rooted with Kat. The decision to include a modern perspective is interesting because it makes the whole musical not about Shackleton per se, but rather about our relationship to his legend.

We don’t see a real explorer but rather an exaggerated character who’s tale of heroism inspires us in the modern day. I recommend watching it live or as a recording because the show is simple, effective and affecting.