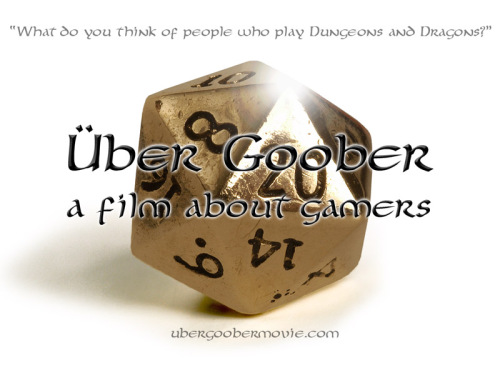 Uber Goober is a case study in how to defend something in such a way as to make it look as bad as possible. It’s a documentary about roleplaying games, larp and other non-digital games and people who play them, but more importantly, it’s a documentary about prejudices against gamers and gamers who have internalized them.

Two of the interviewees appear only in silhouette because they fear repercussions if they’re publicly outed as gamers. In one scene, a man who doesn’t want his face shown sneaks into a children’s playground at night to collect some sand for a structure he’s building for a miniatures game.

It’s true that gamers face a lot of attitude in U.S. society. However, when someone appears in a documentary in silhouette, it makes him look bad, like there’s something shameful to hide. The set up communicates the shame, and reinforces it.

The bad impression is strengthened by the low technical quality of the movie. Because of bad lighting, normal folks look grubby.

The whole thing has a depressing, defensive tone, and many of the interviewees seem desperate to justify gaming. The problem is that when they do this, they, and the makers of this documentary, implicitly accept the premises they try to argue against. In cases like this, you have to change the rules of the discussion, not try to win by arguing that roleplaying is not Satan worship, honest! 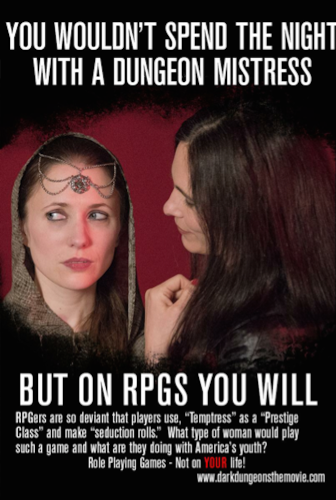 Dark Dungeons is a roleplaying pride movie. It’s well made, hilarious, and makes roleplaying look cool. In 1984, Jack T. Chick published a little comic about the Satanic menace of roleplaying games. At that time, the moral panic about roleplaying games and their occult connections was still going on, and the comic tried to dissuade young people from playing. You can read it here, it’s pretty funny stuff.

Dark Dungeons is a movie adaptation of the comic. It’s quite loyal to the source material, often using dialogue word for word. It trusts the sheer weirdness of the original comic to carry the day, to great effect.

Since it needs to sell roleplaying as a dangerous, seductive menace, all the cool bad guys roleplay. Of course we’re meant to take this with a wink and a nudge. It’s a joke. But that doesn’t take away from it’s effectiveness: We see roleplaying that looks fun, the same way sex, drugs and rock’n’roll is fun.

The movie Mazes & Monsters was Dark Dungeons, except they meant it. It was shown on Finnish television in the late Eighties, and essentially started the Finnish larp scene. Many different folks around the country saw it, thought it looked cool, and decided to try to do the same. Dark Dungeons takes this aesthetic of making things seem seductive by advocating against them, and uses it knowingly.