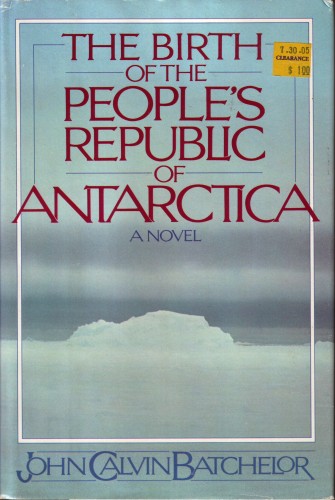 John Calvin Batchelor: the Birth of the People’s Republic of Antarctica (The Dial Press, 1983)

This is one of the strangest Antarctic novels I’ve yet to read. It’s about the son of an American draft dodger and a Swedish witch, called Grim Fiddle. It begins in Sweden, soon the stage for medieval-religious race riots which force our protagonists to flee by the ship captained by the superconservative priest and Grim’s grandfather Mord Fiddle. They join a general exodus of dispossessed people on the high seas and eventually end up on refugee camps conveniently placed on Antarctic islands. Grim leads a bloody insurrection against the relief organization the Ice Cross and founds the Kingdom of Antarctica. The People’s Republic is born when he’s eventually deposed.

It’s a thick slab of a book, and the story meanders everywhere, with dozens of supporting characters with fanciful names like Cleopatra Furore and Wild Drumrul.

It’s pretty obvious that the author has never visited any of the places featured in the book, and the way it’s written, it’s beside the point to complain of total inaccuracy. Still, when those places are Sweden and Antarctica, it’s distracting for me.

I’m not absolutely sure what this novel is about. It reads like a cross between Gabriel Garcia Marquez and Kurt Vonnegut, and I suspect it’s one of those books that utterly failed to predict where the future is going.