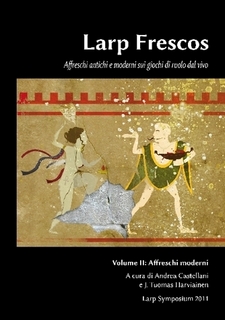 The Nordic tradition of publishing collections of larp and roleplaying game theory and design articles together with the Knudepunkt conventions has inspired similar books in other parts of the world. One of these is the Italian Larp Frescos, published in two volumes and edited by the Italian Andrea Castellani and the Finnish J. Tuomas Harviainen.

Part I consists of Nordic essays translated into Italian, and part II has original articles, most in Italian but some in English. One of my articles is featured in the first book. I’ll comment on the English articles in the second book here.

Like with all collections of articles, this is a mixed bag. It’s wonderful to see new writing on larp, especially from a number of different larp cultures. This present’s its own challenges. The editors made the decision to keep the terminology of each article faithful to its own cultural context. I understand the decision, but it makes the book hard to read. For example, the German substitution of time-in for the more generally accepted in-game makes for some confusion.

Unfortunately, the variety in terminology combined with the florid style of so many articles of roleplaying theory means that the book has its share of disappointments. Often it seems that once I finally understand what’s being said, it’s something fairly obvious and commonplace. A particular offender is Rafael Bienia’s article “Writing Plot: Suggestions from Narratology”. Once you get through tortured sentences such as: “Looking at the chronological space between acting players and the occurring incident, one may use three different moments: past, present or future,” it becomes apparent that the article’s design ideas are mostly pedestrian stuff about using old storytelling techniques in larp. There are some interesting ideas about using exposition to control the content of diegetic space, but they’re quickly glossed over or buried under unnecessary references to Roland Barthes.

Another bizarre article is Raffaele Manzo’s “There is No Such Thing as a ‘Game Master'”. It seems to argue that the term “game master” must never be used because a friend of his had to talk about bathroom sex with his players. Manzo assumes that the players informed their game master about the sex because they thought that the game master’s role required that he should know about it.

Manzo concludes that: “‘Sex in the lavatory’-type situations are awkward at so many levels that, in my opinion, we’d rather take all necessary steps to prevent them.”

In short, we must never use the term “game master”, because if someone is a game master, he runs the risk of being subjected to stories of bathroom sex.

One of the things that Larp Frescos really shines in is the use of references. Most of the articles seem well informed of what’s come before. A particularly interesting example is Eleni Timplalexi’s article “Towards a Discourse Between the Performative and the Iconic”, which delves into some of the core concepts of Nordic larp theory, and where they come from.

Another fine article is Mikko Meriläinen’s “It’s Not Just Fun and Games”. Meriläinen says that it’s unbecoming of the proponents of modern larp to claim that larp can lead to transcendent experiences, but also that larp is completely harmless. If larp can change the world, it means that it can also be dangerous. He calls for larp ethics and a greater understanding of what larp can do, both good and bad.

The book concludes with Lorenzo Trenti’s article “Boxing a Larp”, about writing down a game so others can run it too. Trenti goes through a number of examples of games that have been published and designed to be re-used, and talks about his own choices when publishing a book of larps. It’s an interesting, journalistic look into what’s been done, and I’m sure many will use it as a reference list to look up some of the more interesting publications he writes about.