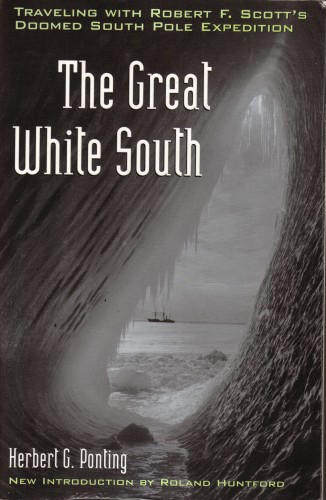 This is yet another account of Scott’s doomed final Antarctic expedition, this time by the photographer Herbert Ponting. Ponting is one of the two famous photographers of the Heroic Age of Antarctic exploration. Frank Hurley is the other one, and while Ponting’s photos are technically very accomplished, they never achieve the grace and lightness of Hurley’s work.

The Great White South is a narrative accompanied by a large number of photos, about Ponting’s experiences on Scott’s staff. Unfortunately, Ponting had already left Antarctica by the time Scott’s body was found, and didn’t participate in any of the memorable excursions of the expedition. He attempts to patch these deficiencies with funny stories about Antarctic animals.

It’s not a bad book, but too trivial to be of interest to anyone except an Antarctic hobbyist. Ponting’s redeeming feature is his honesty, as Roland Huntford notes in his introduction. He loves Scott, but can’t make himself whitewash Scott’s mistakes.