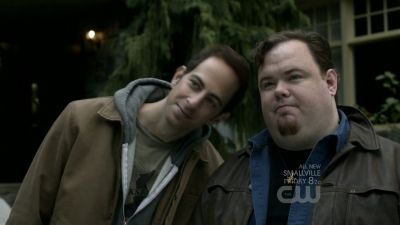 (A gay couple larping as the lead characters of the show in the Supernatural episode “The Real Ghostbusters”.)

Supernatural is an American tv series about a pair of brothers who fight supernatural threats. Episode nine of season five, “The Real Ghostbusters”, featured a layered meta story where the Winchester brothers visit a small convention held in the honor of a writer who’s books are actually prophecies of things the brothers will do. The book series is naturally called “Supernatural”.

To complicate things further, some of the convention attendees are larpers, and they’re holding a larp in which participants can play as the brothers and fight ghosts. The real Winchesters are confused for larpers pretending to be the Winchesters.

The game depicted in the episode seems pretty terrible, but also kinda realistic.  The treatment of larp and larpers is informed and reasonably positive. Often, it seems that the show is intent on making fun of itself and its main characters, and the role of the larper is to be the voice of reason.

Supernatural is a popular subject for incest-themed slash fiction. The show engages with this part of its fandom by making the larpers playing the Winchester brothers into a gay couple.

Larp gets a mention in season four episode eighteen, “The Monster at the End of This Book”. That episode leads to the story of “The Real Ghostbusters”.