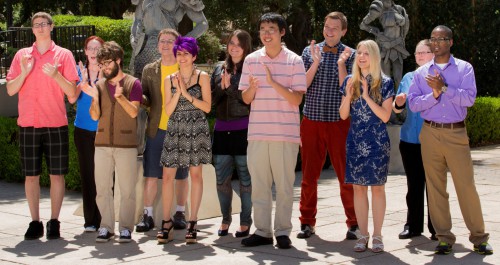 (The contestants on King of the Nerds, season 2)

King of the Nerds is an American reality tv series in which a group of people compete on who’s the nerdiest. We watched season two because one of the contestants, Xander Jeanneret, is a larper. In the picture, he’s the guy with the red pants.

A lot of the second season is characterized by a single casting choice that makes the whole thing seem exploitative and unpleasant. I’m fine with strange people on reality tv, but this time it felt like watching someone who probably shouldn’t be on tv.

Simplistic tasks, crass sponsor visibility, terrible hosts and pointless cheesecake all carry over from the first season. There’s little to like in King of the Nerds.