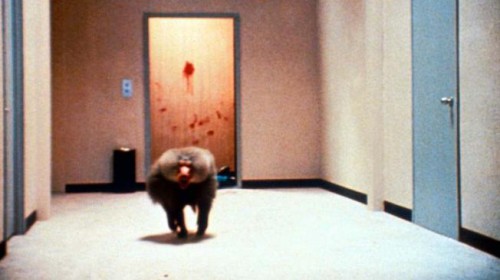 Of all the larp movies we’ve seen, Shakma has one of the simplest, yet singular concepts. A group of medical researchers and students lock themselves into a building to play a really crappy-looking larp. A raging baboon kills them one by one.

The best thing about the movie is that the baboon is played by a real baboon, called Typhoon. No special effects bullshit here! Only hardcore baboon action.

The larp seems to be a treasure hunt style thing where players communicate with the game master via walkie talkies. “I’m using one of my keys to open this door.” The game master has a primitive computer simulation of the game, connected to tracking devices each player has.

During the movie, we had a lot of speculation about how it would end. Perhaps the baboon would kill the game master and take his place. Maybe he would rescue the princess and they would live happily ever after. He could kill everyone, and the last shot would be him driving away smoking a cigar.

Unfortunately, none of these things happened in this movie. 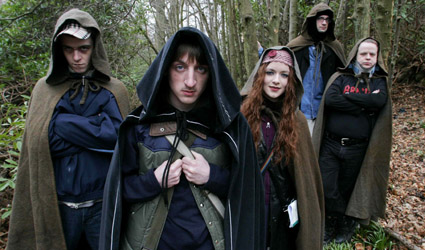 We’ve seen a lot of movies about roleplayers or larpers, but most of them have been made in the U.S. A typical feature of these films (Unicorn City, A Game of the Year) has been a depiction of the hobby and the people in it that I can’t recognize from my personal experience.

The 2005 movie Gamerz was made in Scotland. In style it’s a European slightly comedic slice-of-life film, with little of the overly mannered structure or self-hate that characterizes bad American films of this type. Along with Zero Charisma and The Gamers 3, its one of the best movies about roleplayers out there.

The movie is about Ralph, a university student and game master who hijacks the local roleplaying club and starts to run the game himself. He falls in love with the only female player (like almost all roleplaying movies, Gamerz is routinely misogynistic). His local bully wants to join the group. Off-game bullshit creeps into the game.

I spent my high school years roleplaying intensively, and a lot of the people and situations in Gamerz are recognizable from my youth. Some of the people made me go: “I’ve played with that guy!” One of the themes is the responsibility of the game master not to use the game as a vehicle for personal power games.

Unfortunately, the movie doesn’t quite carry to the end. The scene where Ralph goes over to the dark side (so to speak) is too hard for a movie like this.

Despite it’s problems, Gamerz is worth watching. In the opening credits, the letter i looks like a penis. This is not an accident. 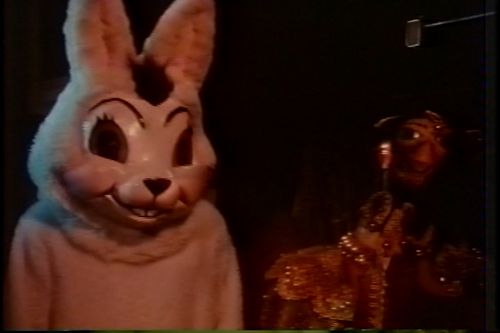 Skullduggery (1983) was described as Mazes & Monsters meets El Topo. This description is accurate. It feels like an Eighties moral panic movie about roleplaying games where the filmmakers have gone native in the weird and occult world of fantasy games.

The movie is about Adam, who works in a costume shop and playes in a game that looks something like early D&D or Talisman. There’s a game master and other players, one of whom does exactly the same sexist jokes as a guy in Gamerz. It was uncanny.

Adam is cursed: one of his ancestors played a game and fell victim to a sorcerer or possibly Satan. The curse manifests through Adam and the game, making him attend strange amateur theatre where immensely talentless people try do do farce and a janitor wanders around with a game of Tic-Tac-Toe on his back.

I don’t mean that negatively. That was all great stuff. For much of the running time, Skullduggery felt like something directed by Jodorowsky.

Unfortunately, by the end Jodorowsky fades away and is replaced by Dario Argento. I suppose one could charitably say that the persistent misogyny of roleplaying movies reached its logical conclusion here in the form of a killing spree.

Skullduggery follows one of the two main cliches of game movies: “The game becomes real”. However, it would be reductionist to think it was nothing more, because this time the cliche was only a starting point in a movie that became something else. By the end, it’s unclear in a metaphysical sense if Adam is still alive or acting from beyond the grave. As his last act, he reaches out to kill his game master.

Sometimes the movie was also pretty funny. There’s a hospital scene where we see the sihouette of a nurse fucking a doctor on a hospital bed. The nurse moans: “You’re the best! In this room. At this time.”

The nurse comes out from behind the curtain in her underwear. The doctor sneaks behind her back, and startles her. He’s wearing a gorilla suit.

Because this is Skullduggery.