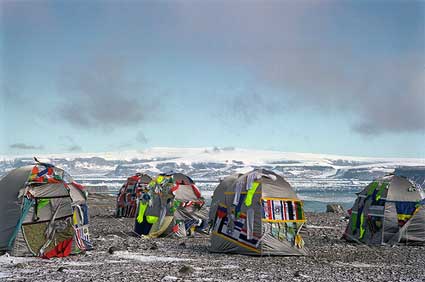 I found an article on this piece from the indispensable art blog make money not art.

Many countries have artist resirencies as part of their Antarctic programs, and some artists even get there on their own. The installations featured in the exhibition in Milan were born of the artists visit to Antarctica, but for me the most impressive thing was the one featured in the photo above, an exhibition erected at Antarctica.

From February-March 2007, the artists installed ‘Antarctic Village’ in Antarctica, travelling from Buenos Aires aboard the Hercules KC130 flight on an incredible journey. Taking place during the Austral summer, the ephemeral installation coincided with the last of the scientific expeditions before the winter months, before the ice mass becomes too thick to traverse. Aided by the logistical crew and scientists stationed at the Marambio Antarctic Base situated on the Seymour-Marambio Island, (64°14’S 56°37’W), Jorge Orta scouted the continent by helicopter, searching for different locations for the temporary encampment of their 50 dome-shaped dwellings. Antarctic Village is a symbol of the plight of those struggling to transverse borders and to gain the freedom of movement necessary to escape political and social conflict. Dotted along the ice, the tents formed a settlement reminiscent of the images of refugee camps we see so often reported about on our television screens and newspapers. Physically the installation Antarctic Village is emblematic of Ortas’ body of work, composed of what could be termed modular architecture and reflecting qualities of nomadic shelters and campsites. The dwellings themselves are hand stitched together by a traditional tent maker with sections of flags from countries around the world, along with extensions of clothes and gloves, symbolising the multiplicity and diversity of people. Here the arm of face-less white-collar worker’s shirt hangs, there the sleeve of a children’s sweater. Together the flags and dissected clothes emblazoned with silkscreen motifs referencing the UN Declaration for Human Rights make for a physical embodiment of a ‘Global Village’.