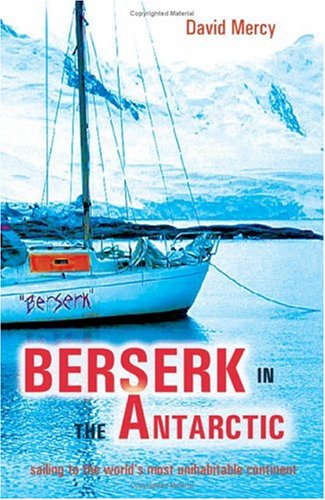 Berserk in the Antarctic is a travel book in which the author, David Mercy, makes his way to Antarctica from Chile in a small sailing boat staffed by him, the young Norwegian captain and an unreliable guy called Manuel. The craziness of braving the stormiest sea in the world in a boat like this is the main selling point of this narrative. It’s Antarctica on a shoestring, and death seems to be around the corner every moment.

Mercy is not the greatest writer in the world especially when he’s called to impart meaning on the most dangerous and insane moments of the trip. Fortunately, his basic story is so good, it overcomes these limitations.

As a sea story and an Antarctic adventure, Berserk in the Antarctic is a ripping yarn. It’s also a nice portrait of the social scene of the people you find at sea and on the islands around the Antarctic continent. Some of the incidental characters, like the Russians and the vacationing wealthy people, are pretty well drawn.

This is also a good book to start if you feel like reading something about Antarctica, but don’t intend to go too deep into it.