This weekend, I was at the larp and roleplaying conference Knudepunkt in Denmark. The conference has a heavy focus on larp design, which often boils down to interaction design.

It was interesting to see how the tools we have developed to make larp could also be used to design conference spaces and programming. 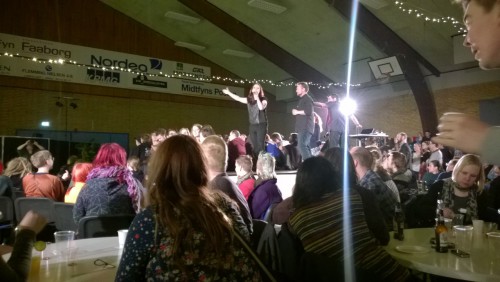 (View from a table at the Bazar social space.)

One of the simple yet clever design choices was made in the way the social spaces were organized. At night, there were two main social spaces, the bar and dancefloor, and the Bazar, a big space with a stage, tents with board games and roleplaying books and tables and chairs scattared around in groups. It acted as the setting for a diverse set of events, from an open mike to a Norwegian ritual.

Both the Bazar and the disco had bars. Non-alcoholic options were available at both. The disco served beer, and the bar at the Bazar served drinks. This created an unobtrusive motivation for people to keep moving around from place to place, and not get stuck in one spot. It was one choice, but there were many like it. 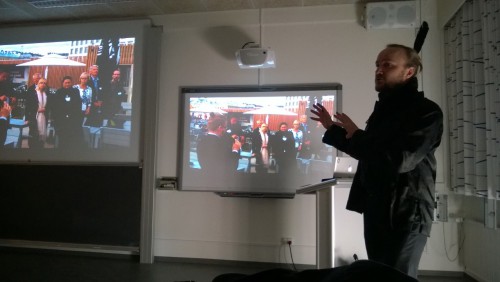 My perhaps favorite was in the Saturday party, with a theme of sins and virtues. One of those virtues was Temperance, and there was a special, dark and empty room dedicated to it, with a sign saying you couldn’t drink beer there. The only thing I ever saw anyone use the room for was to drink beer with the added thrill of breaking a rule.

The program included keynote talks that collected everyone together before we scattered into our various workshops and discussions. Big parts of the Sunday morning clean-up operation were turned into games.

If you want to read more about the ideas presented at the conference, check out the two books, Nordic Larp yeabook 2014 and The Knudepunkt 2015 Companion Book.

One thought on “Non-Digital: Interaction Design Love From Denmark”