Ropecon is a Finnish roleplaying game convention. It’s also been something that’s been a part of my life for twenty years now.

It was first organized in 1994, but I missed the initial years. I’m pretty sure my first Ropecon was 1996. I was sixteen and had just discovered Werewolf: the Apocalypse. I had made a character I figured was real badass, and wanted to play it in a game.

Dipoli is a conference center in Espoo, Finland. It has been home to Ropecon from 1998, but now was the last year. Next time, it’s going to be at Messukeskus, or Helsinki Fair Centre.

For me, Dipoli was “the new Ropecon venue” for maybe ten years, because the first ones I attended had been at another place. The building has come to define the event with its labyrinthine interior and plentiful greenery outside. The event is usually held at the end of July, but this time it was last weekend. 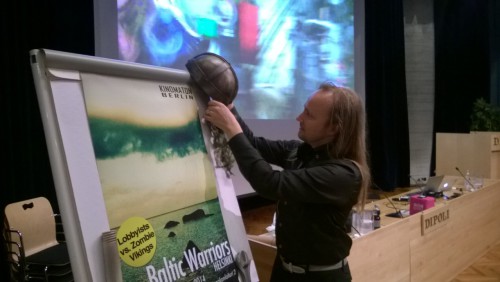 (Mike Pohjola places a viking helmet on top of a flapboard at our Baltic Warriors presentation.)

My Ropecon experiences tend to be defined by the program items I go there to hold, and this year was no different. We started on Friday with Mike Pohjola by doing a presentation about Baltic Warriors, the larp campaign we’re organizing this summer. This is something I’ve done a number of years: Go to Ropecon to talk about my latest things.

I got downright sentimental later when we went to drink outside with a few friends. We headed to the end of a pier down at the waterfront, because I wanted to stand there one more time. I’ve published or helped to publish five books at Ropecon, and after the book publishing presentations, we’ve had a little champagne to celebrate at the pier. This time we didn’t have a book, but it was still nice to go there anyway.

(A larp prop from the game Tonnin stiflat, this is a “torpedo” of canisters that are filled with booze for smuggling during the Prohibition. It was used at the larp costume gala.)

On Saturday night, I held a presentation called Larpin rajoilla, the Limits of Larp, with Maria Pettersson. Our idea was simply to see what are all the places larp has gone to, geographically, socially, within the human body. It was one of the most fun presentations I’ve ever worked on, and seemed to go down well.

Here’s the Argentinean video about Hitler and Vampire larp we used:

On Sunday, we walked around the con area with Maria. It felt nostalgic to think about all the things that had happened there, the larps we’ve run, the books we’ve published, the presentations, the parties, the games and the conversations.

Ropecon will go on, but I suspect that at least for the next ten years, it will feel like its at “the new venue”. 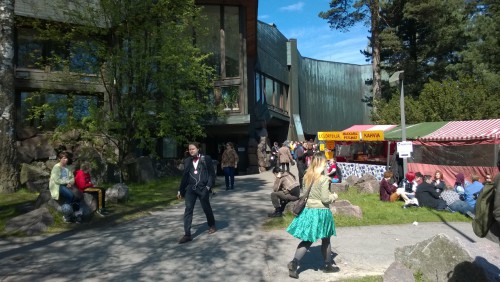 (The view at the entrance on Sunday.)